To support The Joan Dancy & PALS Foundation in the name of Sinderella's Ball.

The Joan Dancy & PALS (People with ALS) Foundation serves ALS patients and their families in Monmouth and Ocean Counties by providing direct grants for products and services to improve their everyday lives.

The Joan Dancy & PALS Foundation is a registered 501(c)(3) charity and has an approved NJ Charity Registration.

The Mission of Joan Dancy & PALS

Our mission is to help and provide assistance, services and programs that support ALS patients and their families in our local communities to live and enjoy as full and as normal a life as possible.

To develop programs and services to aid patients with loans of equipment, communication and speech generating devices, assist with in-home care and social services.

To encourage, but not fund, scientific research for the prevention, alleviation, care, treatment, and cure of ALS patients.

The History: A Promise Fulfilled

At the age of 50, Joan Dancy, a mother of two from Middletown, NJ, was told that she had ALS. She was also told that there was no cure for the disease.

Joan and her fiance, Terry Magovern, found that despite the dense population and numerous medical centers in the area, there were very few resources available locally to help people afflicted with ALS. One of the closest avenues for support is the Greater Philadelphia Chapter of the ALS Association.

Before Joan passed away, she asked Terry to change that situation. It was her wish to establish a grassroots organization to help ALS patients and their families in Monmouth and Ocean counties.

Joan’s hope became a reality when Terry founded the Joan Dancy & PALS (People with ALS) Foundation, an all-volunteer organization, in 2006. Recognizing that the disease impacts the everyday lives of the patient and their loved ones in many different ways, the Joan Dancy & PALS Foundation remains committed to improving quality of life in the ways that matter most.

In his eulogy to Terry Magovern, Bruce Springsteen said “Some people when they die take whole worlds with them. That’s Terry Magovern. Terry was the last great symbol of the raging honky tonk Jersey Shore scene of the 60′s and 70′s. Bar manager, bouncer, lifeguard, father, grandfather, loyal friend, faithful working companion, Terry covered it all.”

Frank “Terry” Magovern was a force to be reckoned with – an imposing figure with a larger-than-life presence and a heart of pure gold. He grew up in Belmar, NJ and served in the United States Navy, specializing in underwater demolition work and later assigned to the Mercury Space program.

Known best to the world as Bruce Springsteen’s longtime personal assistant, Terry was active in local charities, including Holiday Express and Light of Day. He developed a program to train companion dogs to protect victims of domestic violence with Apple Jack Kennels in Maryland.

In 2006, he founded the Joan Dancy & PALS Foundation. When Terry unexpectedly passed away on July 30, 2007, there was no question that the work of Joan Dancy and PALS, his legacy of loyalty and love, would continue to provide a better quality of life for ALS patients and their families. 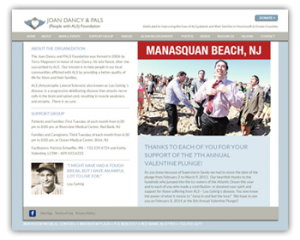 There is currently no known cause for the disease.

Is ALS a rare disease?

It is more common than you might expect. About 5,600 people in the US are diagnosed with ALS each year and it is estimated that as many as 30 ,000 Americans have the disease at any given time. In fact, ALS is as common as multiple sclerosis.

ALS can happen to anyone. It most commonly occurs in men and women between the ages of 35 and 70, but people of any age, race, ethnicity, location or income group can get ALS.

What are the symptoms of ALS?

Early signs of ALS can include muscle weakness, stiffness and cramps, tripping, dropping things, abnormal fatigue of the arms and/or legs, twitches, slurred speech and uncontrollable periods of laughing or crying. Later signs include paralysis of the arms, legs, and trunk muscles, as well as the muscles that control vital functions such as speech, swallowing, and breathing.

Does ALS affect a person’s mind?

No. The vast majority of ALS patients remain sharp despite the progressive deterioration of their bodies.

How long do people with ALS survive?

The average life expectancy is two to five years.

Can ALS be cured?

No, there is no known cure at this time. However, because of advances in research and medical care, many ALS patients are living longer, more productive lives.

What progress had been made to treat ALS?

Rilutek®, the first treatment to alter the course of ALS, was approved by the FDA in late 1995. This antiglutamate drug was shown scientifically to prolong the life of persons with ALS by at least a few months. More recent studies suggest Rilutek® slows the progress of ALS, allowing the patient more time in the higher functioning states when their function is less affected by ALS.